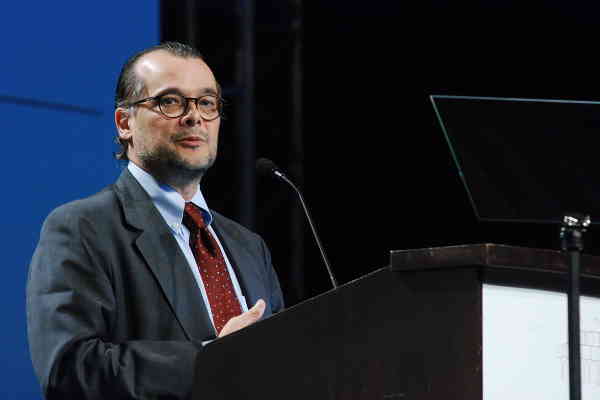 Gustavo Franco, former president of the Central Bank and one of the parents of the so-called Plano Real, which gave rise to the new Brazilian currency, the Real, which interrupted a cycle of many years of rising inflation in the country, give a speech during the “Freedom Forum 2019, held by the Institute of Business Studies (IEE) on April 8 and 9, in Porto Alegre, state of Rio Grande do Sul.Franco showed that the same opponents of the Real Plan are today the opponents of the reforms needed to ensure the proper functioning of the economy. Referring to Senator Paulo Paim, and Zeca Dirceu, son of Jose Dirceu, from the Workers Party politician, convicted of corruption, are the same personages that try to prevent the reform of Social Security.The economist spoke about the Brazilian “Liberal Spring“ and stressed the importance of seizing the moment so that the country can consolidate a thriving and efficient market economy. The enemies of development, however, are still the same as 25 years ago, tried to prevent the consolidation of the new currency.Franco stressed the urgency of taking advantage of the window of opportunity created by the collapse of anti-liberal ideology, represented by the crazy policies of former President Dilma Rousseff, removed from office by impeachment. Leftist doctrines led to mass unemployment, the danger of a return to hyperinflation and a process of corruption in government-controlled enterprises, as has never been seen in any country comparable to Brazil.