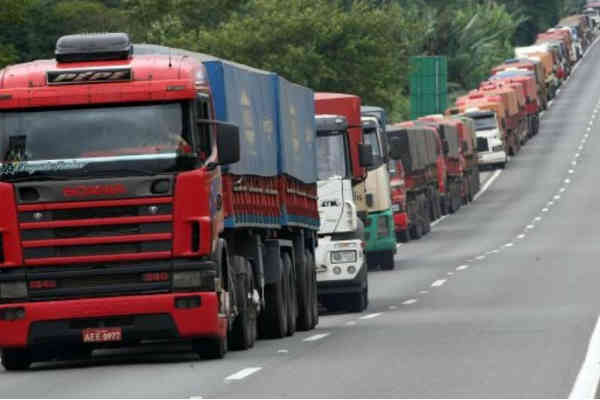 It is said that the antipodean position of Brazil is located mostly in the Pacific Ocean between the Philippines and Japan. Antipode is the geographical location of any spot on Earth diametrically opposite to it. I have doubts here. For me, the most distant point of Brazil is located in Brasilia. Here, the warmth of the right wing and the generous salary at the end of the month makes the bureaucrat on duty a self-assured and oblivious neighbor. It is like a battalion of Marias Antonietas surprised by the pleading of the plebs, in the face of the lack of bread: “Why do not they eat brioche?” And they do not even suspect that, following this question, the guillotine rises …

The shutdown of road transportation along all the Brazilian roads was a disaster that had not been predicted. But its latent probability should have been considered. The illusory image created by Dilma’s government, after the victory in the 2013 elections, that the country would once again grow and that the crisis was behind, was the backdrop, the roundabout, of the last act of economic, political and economic tragedy that knocked out Brazil. Economic, political and social disarray, in this order, succeeded the acts of the drama, whose staging remained beyond impeachment.

A certain euphoria, produced by an injection of adrenaline in the heart of Brazil, caused a portion of the economic agents to invest and contract debts to reinforce their investments. This was the case in the transport sector, encouraged by the reduction of taxes (IPI) and credit facilities. The Bank for National Development (BNDES) ruled the party, distributing advantages, mainly to the friends of the queen of hearts.

Castled in the Central Plateau, thousands of miles from any manifestation of productive activity, President Temer began his journey in search of victories and applause. Surrounded by the encouragement of the sycophants even the saints are prone to sin, and Temer is not exactly what one might call a saint.

His onslaughts toward success were enough to save his skin from the two attempts to dismount him from the throne. The political fabric of Congress, dirty and frayed, was too fragile to sustain a project of institutional renewal. The frustration with the reforms, vital for the country, led to the downgrading of national credibility by the rating agencies.

Temer started to micro-manage small causes: pending ministries; investing against the chaos of public safety in Rio de Janeiro; transferring refugees from Venezuela from the State of Roraima to other states; making small adjustments in national education … nothing capable of raising the hypothermia of his approval ratings before public opinion.

Two feats, however, encouraged the President: the salvation of Petrobras and the numbers of the Central Bank. In fact, Petrobras, which was already considered by the international market as a bankrupt company, was able to rebound and take soar again. Of course it was not the flight a condor. It was just a flight in pain. It left feathers and a lot of organic matter behind, but it was better than death. The Central Bank, in turn, contained inflation and reduced the interest rate. However the price was high. The price seesaw, in order to keep inflation low, was more than 13 million unemployed.

The highest unemployment rate in history has kept a contingent of households unable to consume, has led insecurity to those who kept their jobs, flattening wages and reducing consumption to critical levels. Trade and services were prevented from raising prices or even correcting losses with inflation. This equation kept prices artificially contained.

The market is an enemy of artificialities, however well-made they may appear. Although trade had no alternative growth, nor services, to expand its horizons, low inflation camouflaged a bomb whose explosive potential was gaining so much strength, the more compressed it was maintained.

For a Brazilian bureaucrat, this is the best of all worlds. But they forgot to agree with the truckers. For both self-employed and businesses, the situation of the sector has become unsustainable. The investment made in 2014 in the renewal of the fleet, built in a heavy toll. In the utopian framework of artificial growth, these interest payments would dilute in time, but when reality hit, the euphoria became a hangover. And the reality was cruel: trade and flat services led to reduced freight rates. Correcting losses has become impractical in the face of a paralyzed market. At that point the icing on the cake came in: Petrobras started correcting the prices based on the daily international fluctuations of the dollar and oil.

Now, is it not possible to keep prices artificially frozen, as the Workers Party (PT) government had done in the past? Maybe. But the format was totally wrong. It turns out that prices on the international market fluctuate constantly, both the dollar and oil. However, these variations are neither simultaneous nor symmetrical. They float up and down, independently. The daily corrections, dictated by Petrobras, follow these variations, but their results in the market produced a perverse effect.

When the State raises the fuel price, the new value is applied immediately at the pump, even before the purchase of new stock. However, when it falls, even modestly, this variation does not apply. The process that goes from Petrobras to the pump is mediated by several steps and all apply when the corrections are upward, but, for guarantee, the prices are not reduced in the same proportion when the corrections move downward. In this sense, the corrections become a continuous growth line.

There would be no loss for Petrobras if it practiced its price adjustments for longer periods. In the same way, it would obtain guarantees against losses. The daily variations in fuel prices have become an unbearable, unpredictable factor for transportation. Operating at near zero margins, the risk of variations over very short periods prevents the companies from a minimum of planning, which is totally impractical. The autonomous carrier is even more vulnerable, since he does not have working capital to cushion the shock of temporary losses.

Truckers have lived through stressful times, but never something like what happens today. Over the years, the industry has learned, with its own mistakes, how to make a successful stoppage. Today, the truck driver knows exactly what it takes in terms of logistics to survive for a long time, threatened by police and even military repression. Either way, the truckers have no choice. Their survival is compromised and no threat is worse than the actual reality itself.

On the other hand, government threats can prevent truckers from obstructing roads, but nothing can force them to continue carrying loads by losing money. This observation is too abstract for a Brazilian bureaucrat.

The explosive reaction of road transport was what Nassim Nicholas Taleb calls the Black Swan. Black swans are events that do not go into probability calculations, but if they occur, they can produce extremely high impacts. It is a very rare animal in nature. A kind of outlier difficult to observe, but one that may come one day, and when it does, the effects are disconcerting. The image of the Black Swan was created by the Scottish philosopher David Hume in the 1700s, precisely to question “Inductive Thinking”, that is, thinking that generalizes a phenomenon, or a conclusion from a singular experience.

The Temer government did not properly assess the weight of this Black Swan. It underestimated the scope and extent of the potential damage resulting from the road stoppage. It wrongly suggested that the category of haulers was not a real threat. His first inter locutions with the representatives of the sector were totally mistaken. The television mise-en-scène of Minister Padilha, with the white-plate drivers, produced an opposite effect to the desired one. The staging, which sought to throw public opinion against the industry, was disastrous. The government was unable to understand the chaotic situation the industry is going through and how far they could go.

The pronouncements of the President of the Republic added only wear and tear to his faded image. The effects of the Black Swan will not cease, even after the liberation of the roads. Everything conspires against Temer’s permanence in the Palace. The fact that there are only a few months left before the presidential elections is not a guarantee of victory of the white swan over the black swan.