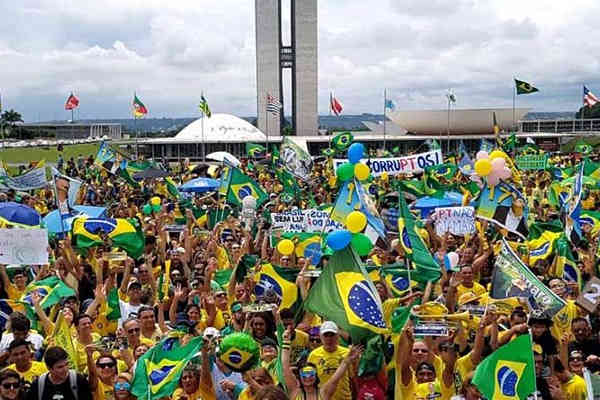 In addition to defending the traditional guidelines of the movement, such as the Social Security reform and the package of the minister Sergio Moro, groups also criticized the Supreme Court and the ‘Centrao” (Group of center wing parties)

Summoned by social networks, the demonstration in defense of President Jair Bolsonaro gathered thousands of people this Sunday, 26, all over Brazil, and was marked by attacks on the president of the Chamber of Deputies, Rodrigo Maia (DEM), and the Supreme Court (STF).

Banners and posters replicated on the avenue displayed a well-matched agenda for the demonstrations: defense of the Pension Reform, Provisional Measure 870 (Administrative Reform), the anti-crime package of Minister Sérgio Moro (Justice and Public Security) and Parliamentary investigation procedure in respect of Supreme Court members.

In Sao Paulo the number of demonstrators was noticeably lower than in demonstrations by Dilma Rousseff’s impeachment, but the Military Police made no estimates.

“The official agenda is the reforms, and defense of the package of Minister Moro, but each group brings its agenda. “We cannot control it,” said Federal Deputy Felipe Barros.

Founder of Nas Ruas, Federal Deputy Carla Zambelli (PSL-SP) made the longest speech and a joke with the public.

She quoted names and mediated the reaction of the demonstrators. Deputy Orlando Silva (Communist Party) and Ms. Maria do Rosário (Workers Party) received the biggest boos. Moro was cheered and the name of Alexandre Frota, federal deputy of the PSL, did not generate reactions.

When he heard booing for Rodrigo Maia (DEM-RJ), Speaker of the Chamber, Zambelli temporized on the microphone and said he would be responsible for approving the reforms.

“Our role in the Chamber is different from your role in the streets. You will understand that. It hurts not to be able to speak what we think, “said the MP in her speech.

Maia, in fact, was the object of furious criticism by protesters, who took banners and posters offensive to him. One group carried a poster with the picture of the deputy and the inscription: “Chileno Traidor”.

“Rodrigo Maia prevaricates when he does not act. It is his duty to vote for the impeachment of Gilmar Mendes (STF minister). The politicians of the center are accustomed to exchange votes for money, “said lawyer Luiza Rayol, 66, leader of the ‘Fiscal of the Nation’ movement.

Speaking on a sound car on Avenida Paulista, Senator Major Olímpio (PSL-SP) said that demonstrations in support of the Jair Bolsonaro government conducted by the country reveal who is really allied with the president of the Republic.

“In the election campaign, when Bolsonaro was on the crest of the wave and close to being elected, there were people busting to take a selfie with him,” said Major Olímpio on the car of the sound of the Revoltados Online movement. “Today we know who are the true allies of Bolsonaro,” said the senator.

He used a staff that joined all the speeches made this Sunday at Avenida Paulista: “With Bolsonaro will end up taking it there, give it,” he said.

The demonstration of Sunday also registered the presence of groups with their own demands and conservative speech.

The descendants of the Royal family preached the restoration of the monarchy, while the TFP (Tradition Family and Property), an ultra-conservative organization linked to the Catholic Church, defended Christian values.

D. Bertrand Orleans and Braganza, the second emperor in the line of the royal family, called the Workers Party a “Marxist red sect” and said that Bolsonaro is a stage before the restoration of the monarchy.

“D. Pedro was the longest period of institutional stability in Brazil. We defend that the election of the Bolsonaro is a stage for the resumption of the historical routes, “he said.