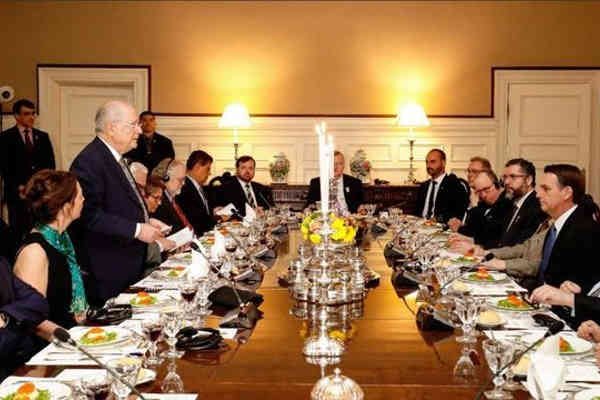 At dinner hosted by Ambassador Sergio Amaral in the ambassador’s house in the country, President praised the relationship with the United States. The president will be received by Donald Trump on next Tuesday, Mar. 19th.

President Jair Bolsonaro attended a dinner at the home of Sergio Amaral, Brazil’s ambassador in Washington, meeting with right-wing thinkers in the United States.

During the meeting, Bolsonaro criticized the “defenders of tyranny” and attacked the “old communism”, the information is of the newspaper the State of Sao Paulo.

In his official Twitter account, Bolsonaro stressed that this is the first time that the United States receives a president who is not “anti-American.” He also stressed that the purpose of the trip is the “pursuit of partnerships with a free and prosperous country”.

Bolsonaro said he is staying at Blair House, a residence used by the US government to receive heads of state on official visits. “It is an honor given to very few Heads of State, and it does not cost a cent to the public coffers. We thank the American Government for all the respect and affection that is being given to us,” he said.