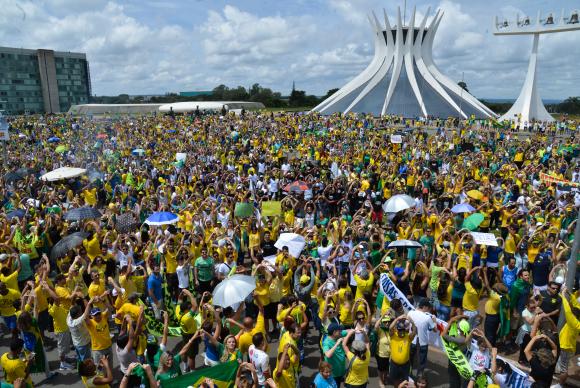 According the political scientist Carlos Pereira, ‘Bolsonaro risks too much and too early’ and the posture of the president can generate animosity and disrupt relationship with Congress

On April 12, right-wing movements gathered in Sao Paulo already announced in a live broadcast by social networks, the call for demonstrations scheduled on Sunday (26) across the country.

Today, the consonant claims are approval of Pension Reform, anti-corruption and support to Jair Bolsonaro.

At the time, however, the guidelines were not exactly the same – they were reversed amidst the streak of right-wing groups and the split within the party of the President of the Republic about the appropriateness of going to the streets.

When they were conceived, the acts were presented mainly as a mobilization contrary to the Federal Supreme Court (STF) – although the defense of the Social Security and the anti crime package of the minister Sergio Moro (Justice) was also placed.

Later, pro-government demonstrations were spurred on as an attempt to respond to protests on May 15, contrary to the blockade of education resources determined by Bolsonaro and that took thousands of people to the streets in more than 170 Brazilian cities.

Since then, in the wake of Bolsonaro and Congress, the discontent with the center has grown (informal group with about 200 MPs from parties such as PP, DEM, PRB, MDB and Solidarity). And the motto “Brazil against the center” was consolidated – is the name of the main event scheduled for this Sunday in Sao Paulo, av. Paulista, starting at 2pm.

In April’s live, which began with the National Anthem and ended with a “Our Father”, the representatives of the movements speak in a “demonstration against Gilmar Mendes and Dias Toffoli”, in “dictatorship of the Judiciary”, that the streets will ” immediately to the STF “, that the STF is a” national shame “and even in” overthrow the STF, which only has scoundrel, stray.”

The background, in April, was the investigation by Toffoli to investigate fake news and offenses against the STF, which was seen by the movements as a gag. “That was the flower of the skin. […] He mobilized the speech of all of us, including mine. The burden of the speech was due to the circumstance of the moment.”

“When we realized that the center was taking this role in the sense of creating obstacles, to maintain this ‘patrimonialism’, it takes it there, give it here … it even supplanted that indignation with the [fake news] .

Moro’s defeat for the center, which withdrew the Coaf (reporting body on suspicious financial motions) from the Justice Ministry , was the last straw for the revolt to focus on parliamentarians.