The BRICS grouping was originally advanced largely as an investment benchmark of emerging markets with the highest growth potential. The emergence of BRICS funds targeting asset allocation in the respective economies experienced all the possible highs and lows in the past decade, with recent periods eliciting a moderation in investor appetite for the asset class on the back of the mounting geopolitical risks (particularly with respect to Russia and China) and the lack of growth vigour in the majority of BRICS economies. In seeking higher returns and high growth performance economies a number of groups alternative to BRICS have been proposed, including the MINT, “the next eleven”, etc. But perhaps another venue to explore could be to look at BRICS regional partners and their economic blocks as a source for alternative or complementary investment strategies and country groupings.

The idea of using the pool of regional partners to construct alternative investment strategies is predicated on the fact that all BRICS economies have a region and a regional economic block where they play a leading role – for Brazil this is South America and MERCOSUR, for Russia this is the CIS and the Eurasian Economic Union, for South Africa this is Africa and the African Union as well as the South African Customs Union (SACU), for India this is South Asia and the SAARC, for China it is East Asia and the Shanghai Cooperation Organization (SCO) and the prospective Regional Comprehensive Economic Partnership (RCEP). In each of these regional groups one may rank its member economies by economy size, level of development of financial markets, etc.

Accordingly, the alter egos or the “first derivatives” of the BRICS would be their partners in key regional blocks or continental alliances with a substantial size of the financial market/economy and scope for playing catch-up to the BRICS core: Argentina in South America, Kazakhstan in the CIS, Pakistan in South Asia, Egypt in Africa, Indonesia in East Asia. The unifying acronym for this group of countries is InPEAKs – the countries in this group may be viewed as the “second generation” of BRICS countries coming from the same regions as the BRICS themselves. A moderate variation of the composition of this group would involve the selection of the largest economies by GDP in the respective regions: Egypt in Africa, South Korea in East Asia, as well as Pakistan in South Asia, Argentina in South America, and Kazakhstan in the Eurasian Economic Union. The resulting acronym – PEAKS – is suggestive of a strategy of portfolio allocation in EM and frontier markets that targets an optimal derivative set of countries from the main regions/continents of the developing world.

The value of deriving a grouping such as PEAKS/InPEAKs lies in the expansion of the BRICS investment domain to include more markets, resulting in superior optionality, longer investment horizons and risk diversification. The latter is particularly important given the high correlation of some of the BRICS markets to each other via the commodity price cycle. Most importantly, however, a set of regional BRICS proxies may be a useful instrument for episodes when BRICS are hit with geopolitical risk. A case in point is the most recent escalation of sanctions and risk vis-à-vis Russia, which led portfolio investor to redirect part of their funds into Kazakh Tenge assets (high yield with lower geopolitical risk). Finally, a regional derivation of BRICS’ alter egos may be motivated by financial integration pursued by BRICS economies in their respective regions – in particular, Russia together with Kazakhstan and other economies of the Eurasian Economic Union is targeting the creation of a common financial market platform by 2025. 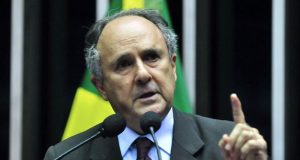 June 28, 2017
by Cristovam Buarque There was a time when politicians debated the best path to the progress, today it is discussed how Brazil can…
Skip to toolbar