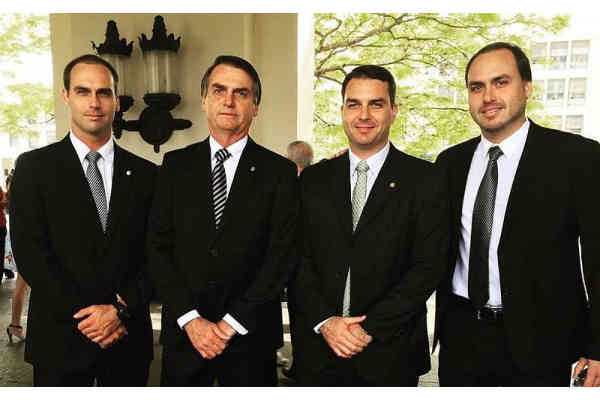 According Folha de Sao Paulo newspaper Brazilian congressman Jair Bolsonaro, who is likely to run for president in this year’s election, along with his three sons who hold office are the owners of 13 properties with a market price of at least R$ 15 million (US$ 4.5 million), most of them in high-end areas of Rio de Janeiro, such as Copacabana, Barra da Tijuca and Urca.

A survey by Folha in local notary publics identified that the main apartments and houses were bought in the last ten years and the price paid for them was well below the assessment made by the Rio de Janeiro City Hall at the time.

When Jair Bolsonaro began his career in politics in 1988, he declared that he only owned a car (Fiat Panorama), a motorcycle and two pieces of land of low value in Resende, in the countryside of Rio de Janeiro, which totaled some R$ 10,000 (US$ 3,000) in current values.

He has only worked as a politician since then. He has been elected a federal congressman seven times.

Jair Bolsonaro, 62, has two ex-wives (he is now married for the third time) and five children. Three of them are politicians: in addition to Flavio, Carlos has been a Rio de Janeiro town councilor since 2001 and Eduardo has been a federal congressman since 2015. In all, the four Bolsonaros have run for office 19 times.

Like their father, Flavio, Carlos and Eduardo also show a fast-paced increase in their assets. With the exception of a partnership Flavio has recently started in a chocolate store, all of them have only worked as politicians.

Up until 2008, the Bolsonaros declared assets of some R$ 1 million (US$ 300,000) to Electoral Courts, which included only 3 of their current 13 properties. The main new acquisitions occurred in the last ten years.

The two main houses in Jair Bolsonaro’s assets are located in a seaside condominium in the neighborhood of Barra da Tijuca, on Lucio Costa avenue, one of the most expensive areas in Rio de Janeiro.

Five real estate offices in the region consulted by Folha said that the market price of the two houses together today is at least R$ 5 million (US$ 1.5 million). That means their prices increased by at least 450% in the period.