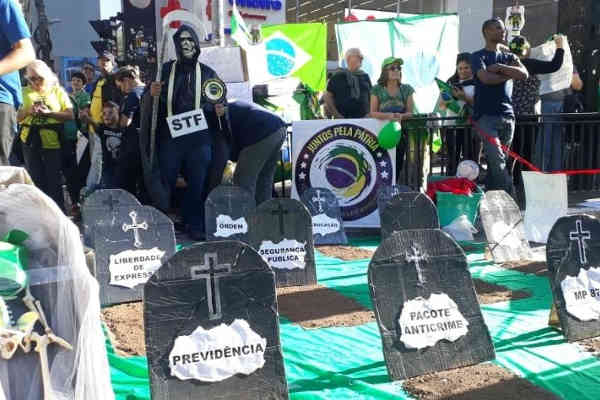 “It was a spontaneous demonstration, it is an orderly people who came to charge, to ask the executive, legislative powers to work, to put into the agenda matters that are of interest to the future of our Brazil,” Bolsonaro said in an interview with TV Record this evening.

The president also said that he exaggerated by referring to students who participated in the May 15 protests in defense of education as “useful idiots.”

“I do not know what they were doing there.”

According to Bolsonaro, there were no cuts in education, but the contingency of expenses of the order of 3.6% of the amount destined to the sector.

“These kids were used by unscrupulous teachers who tried to make a political demonstration against the government, a minority that is not committed to making good young people good professionals, good employees or good bosses.”

Conversation with Congress and STF In the interview, Bolsonaro stated that he has held talks with the presidents of the Chamber, Rodrigo Maia, and the Senate, Davi Alcolumbre, and the Supreme Court, Minister Dias Toffoli, the current government guidelines in Congress and the Judiciary. They were all targeted by demonstrators who went out on Sunday.

“I’m going to talk to Rodrigo Maia again this week with Davi Alcolumbre, Dias Toffoli, so we can have a pact between us to put Brazil in the destination that the entire population wants.” We have everything to be a great nation. we here in Brasilia talk a little more and discuss what we have to vote for in particular. ”

The president also stated that he is not in “litigation” with the other Powers.

“We are in harmony, but we have to talk a bit more, and it is my fault too so that we can put on the table what we have to approve, which we have to repeal too because there is a lot of legislation that hinders the growth of Brazil.”

Without reform, the country will succumb

Bolsonaro said he did not intend to act directly in Congress to approve the pension reform, but again charged the agility of parliamentarians to avoid the aggravation of the economic crisis.

If we do not face this, and quickly, Brazil can succumb economically, as the minister [of Economy] Paulo Guedes has already spoken. ”

Bolsonaro took advantage to rebut what he called a “gossip” about the government’s exit from Guedes if the pension reform is not approved. “It is not that he can leave, I think that if Brazil is economically wrecked, it will no longer work.